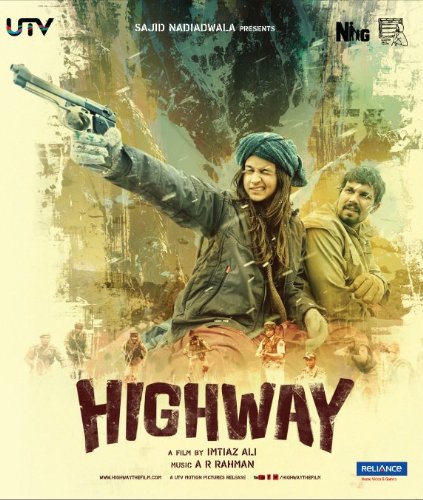 I watched Highway for the second time, with my mum and sister (this time) on the weekend. I had watched the movie a while back and it was a sort of a refresher; I think it was before Tamasha. Now having watched Highway after Tamasha, I cannot simply dismiss the cinema that Imtiaz Ali makes. I will make it a point to never miss his movies at the cinema.

From a story telling perspective Highway faults, majorly. I didn’t buy into the whole ‘Falling for your kidnapper’ track. It sat as a major disturbing point for me. I was not comfortable with this, even the after watching the first time round. I kind of understand why Imtiaz got this to happen; but it just didn’t sit well with me. Its an Irony of sorts.

The story comes into its own when we dissect the characters, and that is where Imtiaz Ali’s strong points are; His characters. In All his films, his characters are fascinating to watch and analyse and he has definitely extracted the best performances from all his actors, be it Kareena in Jab we met, or Ranbir in Tamasha and Rockstar, Deepika in Love Aaj Kal and Tamasha. the same can definitely be said for Alia Bhatt. She gives a raw, emotional performance as Veera; her character is potent. I sat there, and tears streamed down my face as she mouthed her monologue about her past; her facial expressions near perfect. Then again, towards the climax of film, she does it again. This beats any ‘Radha on the Dance Floor’. Alia is so natural here; she completely won my heart over. And then we meet Mahabir, the other bruised, broken character. Randeep plays Mahabir with such conviction, that you get lost in the character’s head trying to plot his next move, until we start to get intimate. When Alia manages to break that wall he built around him. The scenes in Kashmir are emotionally ravaging. Kudos to Randeep. You don’t need to be a big hero in movie, and he shows it.

A. R. Rahman’s score is very effective and haunts the ears. Another plus point is that Imtiaz Ali has a very ‘different’ sense of music compared to the current flavour. He actually allows the music to accompany his characters on their journey.

Anil Mehta’s cinematography is simply outstanding. This is the third plus point in any Imtiaz Ali film. You are surely bound to find this character in ALL of his films. There is no doubt in my mind that Imtiaz Ali knows how to effectively use his background to move his story ahead. Take any of his films, the cinematography stands out beautifully. In Highway, the sceneries and places are spectacular! Even the Interiors of the houses, huts! It is breath taking. No one can detract from Imtiaz Ali, that through his lenses, we are seeing India in a completely different way.

All good, if only Veera and Mahabir could have met under different circumstances. But then again, what is an Imtiaz Ali film without this sort of ‘discomforts’??

I am looking forward to see what Imtiaz Ali’s film with Shah Rukh Khan and Anushka Sharma this year. It will be interesting.

Reliance’s Blu Ray Disc stands tall. Audio Quality and Picture Quality shine. When that rivers in Kashmir flow, we can see and hear it; as if it is flowing out of the TV. When Veera and Mahabir are on the mountain tops, you can actually hear and feel the atmosphere around them.

The DTS MA 5.1 track is punchy and is well delivered. Hear properly for those faint traces of animals, rivers, insects, etc when we are journeying on the truck with Veera and Mahabir, all captured beautifully. Dialogue is clear and audible. The surround is quite good.