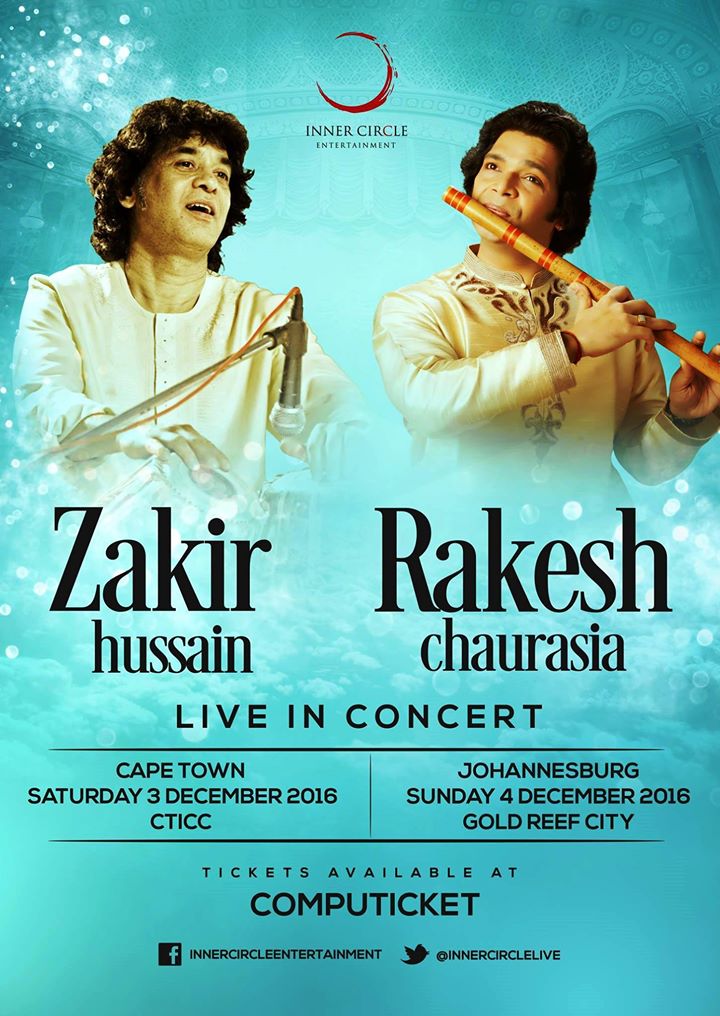 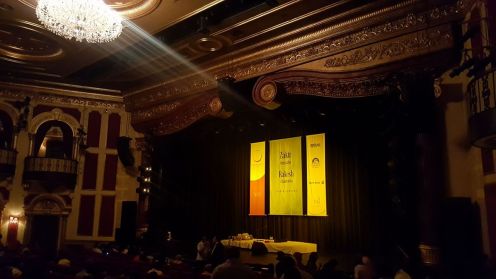 The stage has been set 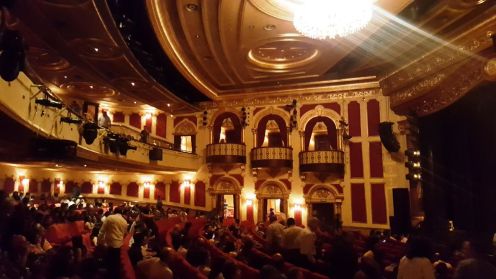 The Audience settles in

As the summer rains jolted down from its heavenly abode, the smell of the moist earth tantalised the senses. Approaching the Lyric Theatre, my window wide open, taking in the atmosphere, my thoughts rush to the concert I am about to witness. We truly are meeting with the greats of the Indian Classical world; we have Nisaar bhai to thank for affording us these opportunities. Last year we had Ustad Shujaat Khan and Surinder Khan who truly regaled our minds with their performances. I love nostalgia, and last year’s concert heralded the best show I’ve ever witnessed; also knowing that I was watching the son of Ustad Vilayat Khan really enticed my thoughts. And this year, on the 4th December 2016, we were to be enticed by Ustad Zakir Hussain and Rakesh Chaurasia.

I have been listening Ustad Zakir Hussain for a very long time, and even his wonderful compositions from films have captured me. His beautiful score from the film Muhafiz (In Custody) was introduced to me by my dear friend Suresh Subramanian. This, in fact set the stage for my excitement when I heard that This Ustad was going to be performing live for us. What was even more of a wonder was that this is the son of great Ustad Allarakha; arguably the most renowned tabla player worldwide. Ustad Zakir continues the tradition and is today, the world’s most prominent tabla player.

Rakesh Chaurasia is the nephew of the brilliant Pt. Hariprasad Chaurasia, and has performed at the Lyric theatre previously; I was really spellbound with his performance the last time round and since then began heeding his albums. His elegance of playing the bansuri is marvellous, his poise and grace are matched by his virtuosity.
The Johannesburg leg of the concert was sold out three months before hand! This just showed the excitement of the South African audience at attending this recital; and also Nisaar’s earnest dedication to professionally organise the concert!

I had taken care not to listen to any music on the way to the Lyric theater and just enjoy the windy silence and noise pollution from the vehicles alongside the highway. This magical feeling at the anticipation of witnessing this concert started to build up, and I wanted a clear – fresh mind to take it all in and get lost in the Ragas. We surely got what was promised!

The concert consisted of one part; and lasted for almost two hours.

We were introduced to Ustad Zakir and Rakesh Chaurasia, a standing ovation with a thunderous applause ensued. Ustad Zakir has a very good sense of humour and cheered the crowd on many times during the recital, also matched by his ability to interact with the audience and explain the technicalities of the Ragas. One particular amusing retort at the beginning of the show went like this: “We will begin with a very famous Chinese Classical piece called Toon-ing”; and then proceeded to tune the tabla, but even while doing that, managed to humour the audience with some odd beats. Ustadji addressed the audience and began with formalities; then proceeded to tell the us that they would be performing Raag Yaman; to that he added, whilst the tabla player is normally just an accompanist to the main instrument, in this case the Bansuri, the tabla will not just be an accompaniment and play level with its counterpart.

Explaining the technical details further, Ustadji mentioned that Rakeshji would begin with an Alaap followed by the Gat and Drut in Matta Taal, consisting of 9 beats, in Raag Yaman. This immediately excited me as Matta Taal is rarely performed. This taal can be used in slow and medium playable tempos (laya), which is said to have historically arose from the glorious days of Dhrupad Sangeet in which only Pakhawaj is used. It however, gives full space for creativity without being an obstacle within its basic structure. Mainly Instrumentalists use this taal to show their control over laya. Raag Yaman is a sampurna (heptatonic) raag, which basically means that it consists of all seven swaras (notes) on the Indian Classical scales. Yaman is a night Raga and is general associated with romance; it can be serene and quite haunting in its melodic rhythm.

Rakeshji commenced the Alaap in ektaal and entranced the audience, in the Alaap the general idea is to acquaint the audience with the instrument and its range; Rakeshji wasted no time expanding Raag Yaman in his Alaap with a delicate, precise rendition. The most alluring sounds imbued the hall, romancing the audience with his Arohana and Avarohana. Interestingly, Rakeshji stretched the ending swaras of the both the Arohana and Avarohana with such haunting passion, that the audience sighed soft Wah Wah’s in unison. I witnessed here, first hand, the calibre of Rakesh Chaurasia; his skill and style of playing the Bansuri is an endearing one. It evoked in me, such a peaceful tranquility. As the taal move to Matta, Ustadji joined in and created even more harmony, at first the soft hint of tabla aroused the audience, and then gradually increasing the tempo. The charm that he created flowing Yaman into the Gat remained placid and engaging. I must make mention here of the range of percussion instruments that Ustad Zakir played out during the recital; it comprised of the electronic western bass pad, tabla set and a mini western cymbal. As the Gat progressed Rakeshji flowed through the meend of Yaman with extreme refinement, matched by Ustadji on his percussion. The duo improvised the Raga to astonishing heights, creating a level of mastery on the bansuri and percussion that I’ve never heard before. It was an aural experience that moved me immensely. The chhed chhad continued right into the drut with excellence. The drut portion enchanted the audience even further with Rakeshji stretching Shuddha Gandhara (Ga Swara) in the Arohana and Avarohana. What a sight to behold, watching Ustadji and Rakeshji playing their hearts out for us Jo’burgers. As the spectacular Yaman rendition reached its finality, we were once again left in awe! A deafening standing ovation resulted, the audience whistling and screaming aloud. 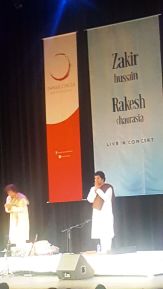 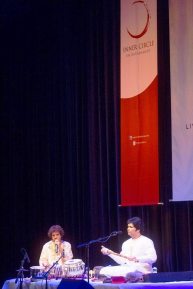 Explaining Raag Yaman to the Audience 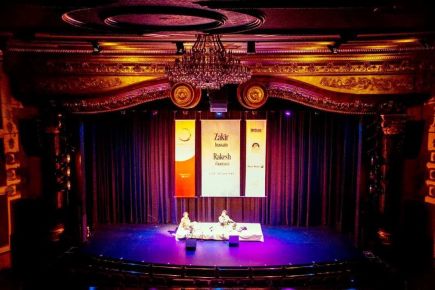 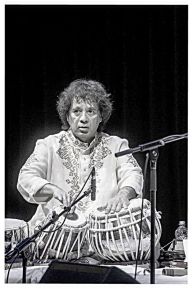 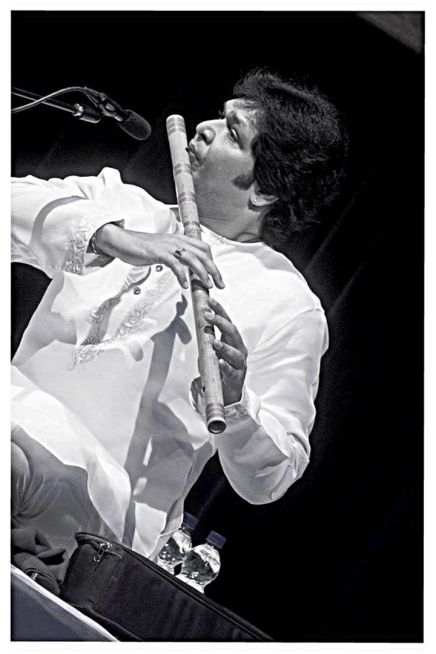 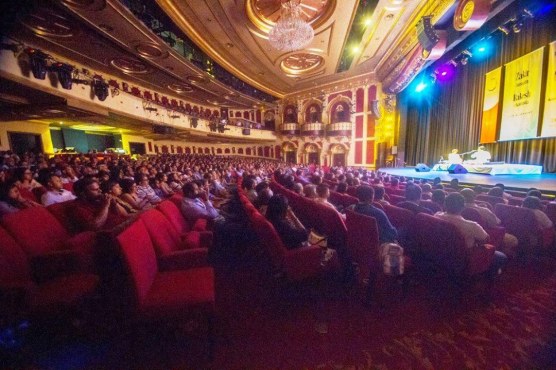 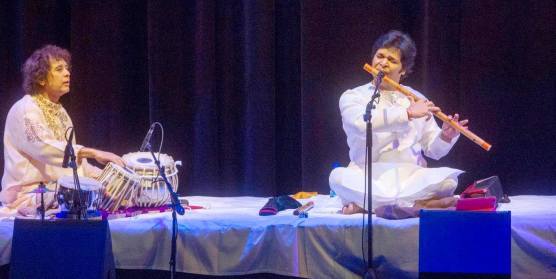 Ustadji once again, humoured us playing the odd beats on the tabla and western bass pad; he then proceeded to inform us that they would be playing Raag Kirwani set to Drut Teentaal comprised of 16 beats. The swaras of Raag Kirwani are the same as Harmonic Minor on the western Classical scales. Kirwani is also a sampurna Raga and is usually played during midnight; it is used to evoke the emotions of pathos. Rakeshji once again begins a short alaap, deciphering the swaras in a very melodiously melancholic rhythm, this instantly evokes yearning in my heart. The duo then gets into the drut with Ustadji playing out the notes in teentaal. This portion made me even more aware of the brilliance of Ustadji, his tabla rendition taking centre stage. I focused entirely on Ustadji, his magnetic composure, and the way he played tabla was so surreal. At 65 years, his charisma stood out more than any player I’ve witnessed in a live recital. All in the meanwhile Rakeshji glided through the swaras of Kirwani with remarkable gusto. The improvisations moved between the duet and Jugalbandi’s, and how too. Challenging each other, the swaras and tempo exploded together to create an enthralling experience. I again just watched in admiration, getting lost in Kirwani; the duo receiving accolades from the spellbound audience in the form of sporadic clapping, whistles and wah’s. I have to also add that during the jugalbandi portions, the duo shared a compelling camaraderie, smiles and winks. Ustadji played a mind-blowing solo in teentaal that further channelled thoughts of Ustad Allarakha. Also within this solo, Ustadji created a mellifluous beat, playing the Bayan with one hand and creating a completely different but complementing sound on the Dayan; creating euphoria within the audience. This led to the crescendo of the evening with the climax portion of Raag Kirwani played out in a somewhat trance like state. Another uproar followed. 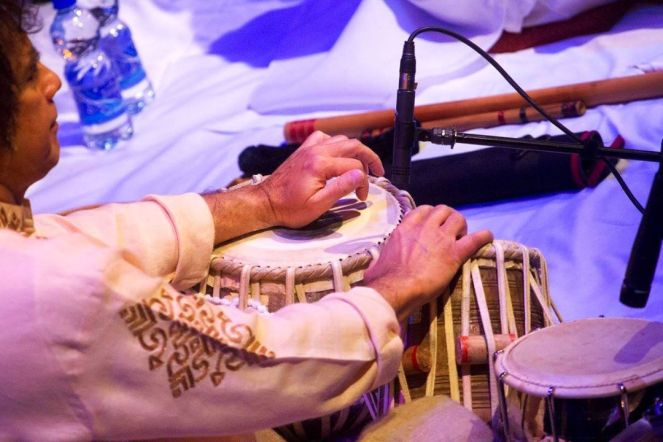 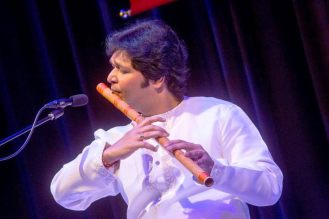 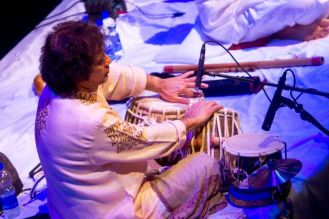 Drawing the concert to its end, Ustadji announces that the Pahadi Dhun will be exemplified. As if to tie the previous two portions together, the Pahadi dhun relays peace, power, pathos and poignancy; it is played during the early evening time. The raga is like a lover, unruffled in union, serene in separation, powerful enough to achieve eternal union, but resigned to the painful parting ordained by destiny. Pahadi, a Kashimiri folk melody in its origin, is a simple raga – one may think of it as a ‘dhun‘. On the other hand, however, proper and dignified treatment elevates it to the rightful, lofty and esteemed stature of an exquisite raga -beautiful, intense, elegant and delicate. Its aesthetic atmosphere is radically distinctive and without equal. The nostalgia hits straight to the mind at the beginning of the Rakeshji’s alaap; I close my eyes and it makes me reminisce of Raaga Fanatasy where Pt. Hariprasad Chaurasia played the same dhun. Rakeshji is truly a master and showcased it wonderfully. Ustadji joined in playing dadra taal consisting of 6 beats, and together transported us to the Kashmiri mountains and valleys. Seamlessly Rakeshji starts playing ‘Vasihnav Jana To’ in Raag Mishra Khamaaj for a short while. I can see the tapping hands and feet of my fellow audience, we are delighted. Then a short rendition of Jagjit Sahab’s ‘Kal Chaudvi Ki Raat’ based also on Raag Mishra Khamaaj; all this done beautifully without a pause in the recital. This follows on to the climax of the Pahadi Dhun. The audience gives a final rousing standing ovation. 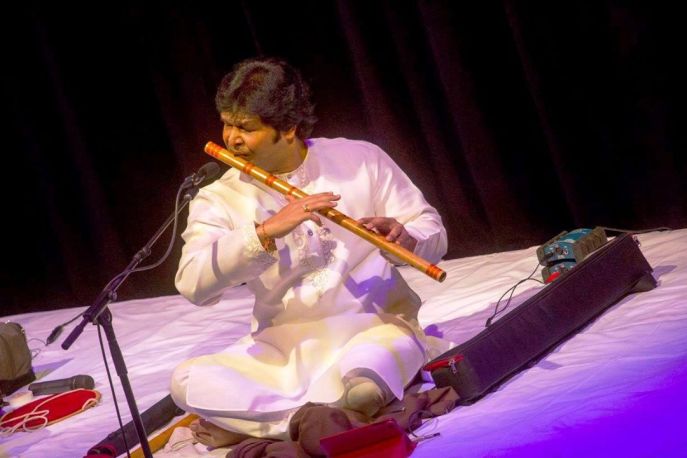 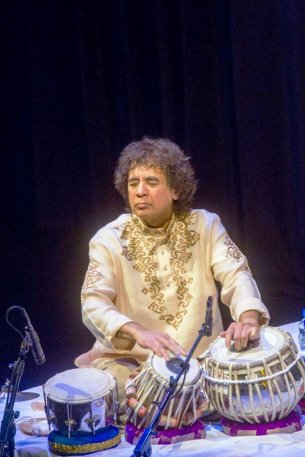 Dadra Taal
Nisaar Bhai, thank you once again for bringing to our shores these masters, and for us classical music lovers an unwavering and extraordinary experience. Your efforts will always find appreciation with me, and the rest of the South African audience.
Darshna, I missed you!!; but we will definitely continue the tradition next time. 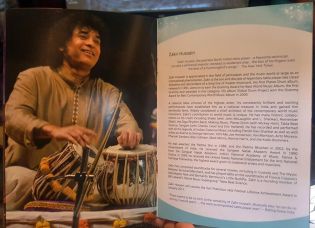 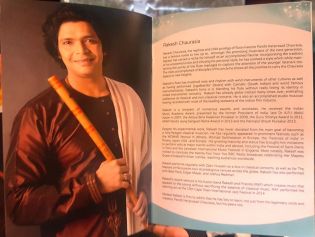 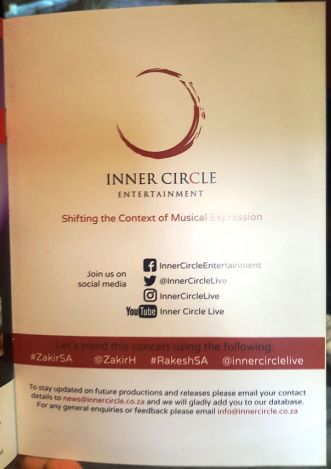